How many times has Tiger Roll won at the Cheltenham Festival? 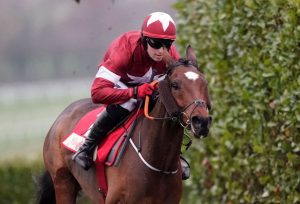 At just under 16 hands high, Tiger Roll is small for a steeplechaser and was, in fact, originally bought by owner Michael O’Leary to win the Fred Winter Juvenile Handicap Hurdle at the Cheltenham Festival. However, Tiger Roll proved significantly better than anticipated, winning the Grade One Triumph Hurdle, on just his second start for his new connections, in 2014.

Subsequently, despite his diminutive size, fences have been the making of him. Of course, in April, 2019, he made history by becoming the first horse since Red Rum, in 1974, to win the Grand National two years running, but he also has three further successes at the Cheltenham Festival to his name. He won the National Hunt Chase in 2017 and the Glenfarclas Cross Country Chase two years running, in 2018 and 2019, en route to victory in the Grand National.

Still only a nine-year-old, Tiger Roll takes the odd liberty with an obstacle but, although he did once unseat his rider in a novices’ chase at Galway, when bumped by a rival at the second-last fence, he has never fallen. So, while Michael O’Leary has said that Tiger Roll is ‘very unlikely’ to run in the Grand National in 2020, another win in the Glenfarclas Cross Country Chase – which would be his fifth at the Cheltenham Festival – looks within the realms of possibility.