Which Cheltenham Gold Cup winner started and ended his career by falling at Kempton?

Without wishing to give away too much too soon, the horse in question made his racing debut in a novices’ hurdle at Kempton, on January 21, 1983. Having made the running, he crashed, exhausted at the final flight and took so long to get to his feet that it appeared, for a time, as if he might not do so. Thankfully, he did.

He went on to win 34 of his 70 starts over hurdles and fences and over £650,000 in prize money, but on his final start, in the King George VI Chase at Kempton on Boxing Day, 1991, again fell, when beaten, at the third-last fence. On that occasion, though, he was quickly back on his feet and received a heartwarming round of applause as he galloped, riderless, past the packed grandstands. Two seasons previously, he had enjoyed what was probably his finest hour, overcoming bottomless ground and racing left-handed – he was two stone better going left-handed, according to his regular jockey – to win the ‘Blue Riband’ event of steeplechasing, the Cheltenham Gold Cup.

You may well have guessed by now that the horse in question is Desert Orchid who, despite an inauspicious start and end to his career, not only won the Cheltenham Gold Cup, but also the King George VI Chase, four times, the Irish Grand National and the Whitbread Gold Cup, to name but a few of his major successes. He was awarded a Timeform Annual Rating of 187, inferior only to such luminaries of National Hunt racing as Arkle, Flyingbolt, Sprinter Sacre, Kauto Star and Mill House.

How many fences do horses jump in the Cheltenham Gold Cup?

The New Course is a left-handed oval, approximately a mile and a half in circumference and constantly on the turn. Although sharper than widely believed, with pronounced undulations, the New Course is essentially galloping and testing in character, with ten, notoriously stiff fences per circuit.

From the start position, horses in the Cheltenham Gold Cup jump two plain fences – which will become the second-last and last in two circuits’ time – in the home straight before continuing uphill out into the country. The fourth fence is the water jump and the fifth and seventh fences are open ditches, the first of which is jumped uphill. The uphill ditch can prove problematic as horses can see the rising ground on the landing side, which alters their perception of the fence. The second open ditch is followed by two more plain fences and a pronounced downhill run, with another plain fence, back to the point of departure.

The fence after the turn at the top of the hill, which is jumped as the ninth and nineteenth, or fourth-last, has been resited for safety purposes in the past, but still provides its fair share of incident, as does the fence on the downhill stretch; this is especially true on the second circuit, as horses come under pressure. At the end of the second circuit, horses jump the two fences in the home straight for a third, and final, time, making a total of 22 fences in all. With further knowledge of the Gold Cup course, you’re well positioned to take advantage of betting opportunities on bettingsites.ie . You’ve got to be in it to win it!

Who is Nicky Henderson? Nicholas ‘Nicky’ Henderson is the son of the late Major John ‘Johnny’ Henderson, a founder of the Racecourse Holdings Trust and, as such, credited with helping safeguard the future of Cheltenham Racecourse in the Sixties. The name of Nicky Henderson, too, is synonymous with Cheltenham, predominantly the Cheltenham Festival, where he has saddled 68 winners, making him the second most successful trainer in history, behind only perennial Irish Champion Trainer Willie Mullins.

Indeed, Henderson is the leading trainer in the history of both the Champion Hurdle, which he has won eight times and, jointly, alongside Tom Dreaper and Paul Nicholls, the Queen Mother Champion Chase, which he has won six times. He has also won the Cheltenham Gold Cup and the Stayers’ Hurdle twice apiece.

Henderson has also won the National Hunt Trainers’ Championship six times including, most recently, in 2019/20. The National Hunt season was brought to a premature end on March 25, as the result of the coronavirus pandemic but, at its close, Henderson had saddled 118 winners, including 15 at Graded level and, more importantly, amassed £2.53 million in total prize money; his seasonal total was £192,550 higher than his nearest rival, reigning Champion Trainer Paul Nicholls.

Henderson, who turns 70 in December, 2020, began his training career as assistant to eight-time Champion Trainer Fred Winter in 1974, before taking out a training licence in his own right four years later. He is currently based at Seven Barrows in Upper Lambourn, Berkshire, the yard to which he moved in 1992.

Which is the oldest race run at the Cheltenham Festival? 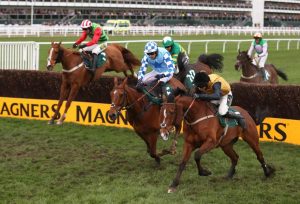 Nowadays, the Johnny Henderson Grand Annual Chase is a prestigious Grade 3 handicap steeplechase, run over 2 miles and 62 yards on the New Course at Prestbury Park and open to horses aged five years and upwards. The Grand Annual Chase has been a fixture of the Cheltenham Festival since 1913, but the inaugural running actually took place nearly seven decades earlier, ‘in the neighbourhood of Andoversford’, which lies approximately six miles east of Cheltenham, in 1834. The initial contest was an eventful affair, eventually won by Fugleman, owned and ridden by Mr. R. D’Oyley. The Grand Annual Chase was discontinued in the latter part of the nineteenth century and, in the early twentieth century, staged at various other venues before returning, permanently, to Cheltenham.