How fast are horses? 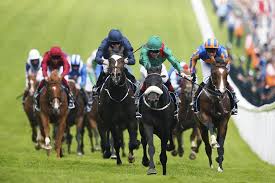 On average, young, healthy, well-conditioned horses gallop at between 25 and 30 miles per hour. However, according to Guinness World Records, the fastest speed ever recorded by a racehorse was the 43.97 miles per hour achieved by the two-year-old throughbred filly, Winning Brew, at Penn National Racecourse in Grantville, Pennsylvania in May, 2008. Trained by Francis Vitale, covered two furlongs, or a quarter of a mile, in 20.57 seconds.

Of course, despite the American penchant for horse races well short of five furlongs – in some cases as short as a furlong, or even half a furlong – the minimum distance in many racing territories, including Britain, is five furlongs, or five eighths of a mile. Again, according to Guinness World Records, the fastest time recorded over five furlongs was the 53.69 achieved by the four-year-old Stone Of Folca at Epsom Racecourse in Surrey in June, 2012. Trained by John Best and ridden by Luke Morris, Stone Of Folca averaged 41.67 miles per hour en route to the fastest time recorded on a British racecourse since the advent of electronic timing.

Which is the oldest regulated horse race in the world? The oldest regulated horse race is in the world, in fact, the Doncaster Cup, which was established, as the Doncaster Gold Cup, in 1766, a decade before the oldest British Classic, the St. Leger Stakes, also run at Doncaster Racecourse. Nowadays, the Doncaster Cup is a Group Two contest run over two miles and two furlongs and, along with the Gold Cup at Ascot and the Goodwood Cup, constitutes part of the so-called Stayers’ Triple Crown. However, the Doncaster Gold Cup was originally run over four miles, on Cantley Common, before being transferred to its current home, on Town Moor, ten years later. The history of British horse racing is awash with stories of horses that managed to snatch defeat from the jaws of victory, but – with the possible exception of Devon Loch in the Grand National in 1956 – perhaps none more bizarre than Ile De Chypre in the King George V Stakes at Royal Ascot in 1988.

Bred and owned by Athos Christodoulou and trained by Guy Harwood at Pulborough, West Sussex, Ile De Chypre was, at the time, an unexposed three-year-old maiden who had, nonetheless, run with sufficient promise on his reappearance to be sent off second favourite for the competitive handicap. Ridden by stable jockey Greville Starkey, Ile De Chypre looked certain to justify market support when going clear in the closing stages, but inexplicably veered badly left in the last hundred yards or so, unseating Starkey as he did so.

The details of the incident were not revealed until a year later, when car dealer James Laming to Southwark Crown Court that he had fired an ultrasonic ‘stun gun’, disguised as a pair of binoculars, at Ile De Chypre. Accused of conspiracy to supply cocaine and money laundering, Laming claimed that money with traces of cocaine found in his car was on-course winnings, but he was less than forthcoming regarding other details of his alleged coup.

Which was the most prolific racehorse ever?

Frankel, who was retired from racing in October, 2012, unbeaten in fourteen races – ten of which were at the highest Group One level – was subsequently hailed as the highest-rated in the history of World Thoroughbred Racehorse Rankings, which were introduced in 1977. However, unquestionably brilliant though he was, even Frankel came nowhere near some of the most prolific thoroughbreds – undefeated or otherwise – in the history of horse racing across the globe.

The most prolific racehorse ever appears to have been Galgo Jr., a Puerto Rican thoroughbred who racked up 137 wins from 158 starts between 1930 and 1936, including, unbelievably, an unbeaten sequence of 39 in the space of a year. Next best, in terms of outright wins, comes American Horse Racing Hall of Fame inductee Kingston, who won 89 of his 138 starts in the late nineteenth century and finished out of the money just four times.

Of the horses which, like Frankel, remained unbeaten throughout their entire racing careers, another Puerto Rican-bred thoroughbred, Camarero, notched up 56 consecutive wins in the 1950s and tops the list. However, the legendary Hungarian mare, Kincsem, who was unbeaten in 54 races all over Europe, including the Goodwood Cup on her only visit to Britain, in a four-year period in the 1870s is a worthy second-best.